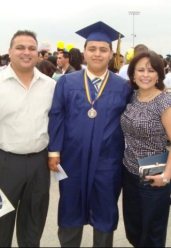 Jose(left), Jonathan, and his mother at his high school graduation in 2009.

Many children of union members follow in their parents’ footsteps into a similar career path. At National Labor College (NLC) we have helped numerous union family members follow their dreams by earning a college degree. For the first time, we can proudly say that a son will soon follow his father’s path of earning a degree at NLC.

Meet Ironworker Jose Alberto Naranjo and his son Jonathon Naranjo! When classes start Tuesday, September 3, 2013, Jonathan begins a journey he watched his father complete seven years ago. Jose earned a Bachelor of Arts degree in Labor Education in 2006, and is currently a Structural Steel Superintendent.

END_OF_DOCUMENT_TOKEN_TO_BE_REPLACED

My name is Edison Fraser. I am a Special Grand Lodge Representative with the IAMAW Transportation Department. When I graduated High School, my intentions were always to go to college. I began working, started a family and just could never find the time or money to enroll in college. One day, I attend a leadership class at the William Winpisinger Education Center and found out that my union, the IAMAW, who is often referred to as the Machinists Union, had a partnership with NLC. It was some of the best news I heard. I immediately made a commitment to myself that if I ever became a full time union representative, I would enroll at NLC.

In April 2012 I became a full time representative and immediately enrolled in the Bachelor of Arts in Labor Studies program. Because of the partnership with my union and NLC, I am now on my way to earning my degree and will graduate before my son goes to college. I have no regrets because I will not only have a degree in the end but I have also been able to better service my members.

The Union’s Path to the Future Necessarily Includes Education

In preparation for 2009 negotiations, United Steelworkers Local 227 sent me to National Labor College (NLC) in Silver Spring, Maryland, to take the course, “Negotiating and Writing Contract Language.” It was the first time I had ever heard of a “labor college” or had any knowledge that a formal accredited education geared for organized labor was available. My father was a union employee at Phillips Petroleum from 1944 until 1985, walked a picket line during several strikes as a member of OCAW, and served at least some time as a representative for his group. We lived near the Houston ship channel where the oil industry was booming in the 1950s and 60s and thousands of workers crowded union halls in support of union jobs. At 44 years of age, I was hired into my first career union job at the same plant where my dad retired, signed up to be a union member immediately, and within a year began serving as an appointed joint safety committee chair. I have served our union ever since as an elected representative in one or more capacities through the mergers of OCAW with PACE and of PACE with the Steelworkers, and currently continue to serve as Secretary Treasurer.

END_OF_DOCUMENT_TOKEN_TO_BE_REPLACED

We are happy to announce that two members of the National Labor College (NLC) family recently tied the knot. On July 12, 2013, surrounded by their children and grandchildren, Brenda Cantrell and Rick Inclima were married at their home. They had a beautiful ceremony and even the rain cooperated. Brenda is an NLC alum, current adjunct professor, and former director of the HazMat program. Rick Inclima is also an NLC alum, Education Director for Brotherhood of Maintenance of Way Employees (BMWE), and one of the first peer trainers for the rail program. The lucky couple met because of the Rail Hazmat program. Brenda and Rick will be honeymooning in their cabin in the West Virginia woods. 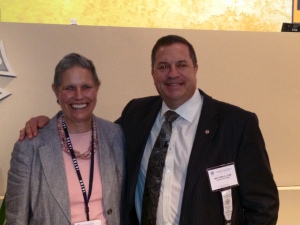 Peinovich was invited to speak at the convention by IATSE president Matt Loeb, who is a champion of education. Since he was elected in 2008, Loeb has strongly supported providing educational opportunities for IATSE members. Loeb was elected to NLC’s Board of Trustees in June.

NLC also hosted a booth at the convention and many delegates signed up to receive more information. They’re following in the footsteps of fellow members Dennis and Dorian Nicely, who plan to start classes in September. Several graduates also stopped by.

National Labor College will celebrate its commencement on Saturday, June 22, 2013 at the Maritime Institute of Graduate Studies (MITAGS). We are proud that four distinguished individuals will join us to receive honorary degrees.

The honorees were chosen for their genuine achievement and distinction in their field or activity consonant with the mission of the College. Meet this year’s honorary degree recipients.

is often called “one of the most courageous persons the Civil Rights Movement ever produced.” Georgia congressman Lewis has dedicated his life to protecting human rights and securing civil liberties. He is widely admired on both sides of the aisle because of his dedication to the highest ethical standards and moral principles.

is the Executive Director and founder of Interfaith Worker Justice, the nation’s largest network of people of faith engaging in local and national actions to improve wages, benefits and conditions for workers, especially those in the low-wage economy.  Since 1996 she has been helping build interfaith groups and workers centers around the nation.

was overwhelmingly re- elected president of the 30,000‐member Chicago Teachers Union this past May, after first being elected in June 2010. Ms. Lewis has been a member of CTU since 1988, and taught high school chemistry in the Chicago Public Schools for 22 years. She believes that students, parents, teachers, and community members are educators’ natural allies.

is State President of the Professional Fire Fighters of Wisconsin and has been a fire fighter for more than 15 years. He was instrumental in helping pass two pieces of legislation that were a huge victory for fire fighters across Wisconsin. The Infectious Disease Presumption fought to make sure firefighters are covered if they contract a disease or disability on the job. The bill also that ensures families and spouses of fire fighters who die in the line of duty will have their health insurance premiums covered.

National Labor College’s Alumni Association has named Marc A. Norberg – who graduated in 2008 with a Bachelor of Arts degree in Labor Studies – Alumni of the Year. Marc is the Assistant to the General President of SMART (Sheet Metal, Air, Rail and Transportation Union).

Among his other duties, Marc coordinates the International’s interface with renewable energy sources, green energy and combined heat and power organizations. Formerly, he was the President and Business Manager of Sheet Metal Workers Local 18 in Milwaukee, Wisconsin, and also served as a Labor Trustee on the SMWIA National Pension Fund. Marc and his wife Linda have two sons, both SMWIA members and third generation journeymen sheet metal workers.

The alumni of the year was chosen based on involvement with the alumni association and dedication to promoting NLC. END_OF_DOCUMENT_TOKEN_TO_BE_REPLACED 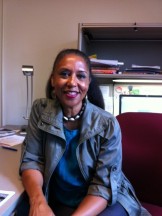 Dr. Deborah Robinson recently joined the faculty at National Labor College as the Director of the Emergency Readiness and Response Management degree program. She is an internationally recognized facilitator and senior program manager with more than 25 years of experience working with agencies, organizations, and movements in numerous countries, so when she was asked to be on a panel on “International Initiatives” at the NAACP Leadership 500 Summit on May 24, Dr. Robinson was eager to be involved.

END_OF_DOCUMENT_TOKEN_TO_BE_REPLACED

National Labor College is now accredited to offer an Associate of Arts (AA) degree. Courses in the fully online program will be offered for the first time in the fall semester that begins on September 3. Introductory courses — from writing to accounting to history and more — will be offered during each of our three annual semesters, which start in September, January, and May.